A sad loss happened this past solstice for our farm…Rich’s grandma, Lorene, died. While failing health meant that she had only been to the farm once, she was always a source for inspiration and support for us, and she will be missed greatly.

Some photos and her eulogy follow, for ours, and genealogy’s sake. While she was a very active woman, the last few years saw a broken hip, with the attendant difficulties that brings. Added to that, her outliving of all of her siblings, her husband, as well as one of her children, by the end, didn’t leave her anyone left to take care of. Her active mind didn’t have anything to focus on, and she started to drift into confusion and frustration.

Rest in peace, Grandma, where clarity and vitality is yours again…we love you, and we’ll miss you. 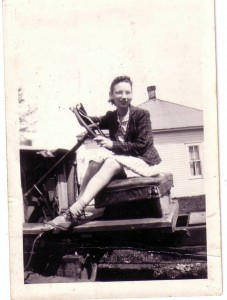 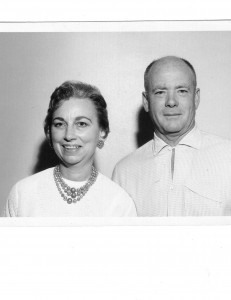 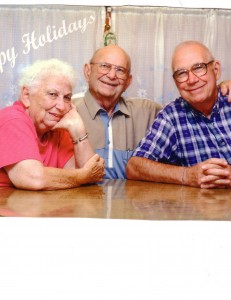 Lorene (Rumph) Sanders was born in 1923 on a farm near Mercer, Missouri. She was raised on the farm along with her two brothers and one sister. This was a very hard life for everyone as her Mother passed away when she was ten years old. The great depression was at its peak. The farm had none of the facilities we are accustomed to today; no electricity, interior plumbing or running water. The majority of the Mother’s chores were left to Lorene. Her sister Pauline married and moved away shortly after her Mother died. Her brother, JD worked the farm and her baby brother Robert was too young to work the fields. Lorene graduated in 1941 from Mercer High School in Mercer,MO.

She married in 1940 to Joe Sanders and moved to Iowa and lived on the farm of his parents. Their first daughter, Emma Jean, was born in 1942. Later that year Joe enlisted in the Army Air Corps and subsequently was stationed overseas in the European theater. Lorene stayed with his parents to help on the farm. He was honorably discharged in 1945. In 1948 Michael was born and then in 1950 Sara was born.

Seeking a better life they moved with their three children to California in 1952. After living in the Los Angeles vicinity for two years, they moved to Palmdale in 1954 and lived in the same house ever since. Lorene, besides being a homemaker ,worked as a cook at a Lancaster restaurant and the NASA cafeteria at Edwards. Her last job was as a clerk at Boeing.

Prior to Joes death in 1981 they enjoyed fishing outings in Baja and the Salton Sea as well as outings with JD and family at Pismo Beach for clam digging and with JD’s, Robert’s and Pauline’s families for salmon fishing at Coos Bay,OR. Canning the salmon at the camp was a highlight of the trip.

Lorene loved to work in her yard with all her flowers – plant them, water them, and look at them.