Gullies in the landscape cause several problems, mostly more rapid dewatering of the surrounding landscape in the dry season, and increased erosion as the gullies move upstream, taking valuable topsoil away.  Mossback Farm experienced severe gullying in the years before we purchased the property, due to mismanaged cattle grazing.  This grant was an attempt to stabilize their movement, and to flatten the flow curve in the drainages.

10 plugs were installed at various locations in the property, in a mix of mature (nearly stabilized gullies, with a V-shaped cross section, and grass vegetation) and younger, more active (U shaped cross-section, with bare earth at their base as they actively erode) erosion sites.

The work had fair to excellent results, depending on the site.  The mature (V-shaped) gullies didn’t have the sediment load needed to fill the plugs at an acceptable rate, so needed more fill to top them off.  They also didn’t seem to flatten the flow curve as much;  however, they were in locations with smaller watersheds, so it wasn’t a good measure of success.  They did appear to capture and store more water into the soil, though, when things dried out.  And a purely anecdotal observation…we haven’t run our well dry while watering the garden this year, which might indicate more groundwater recharge.  Far more work / data would be needed to prove that, though.

The active gullies (U-shaped) had a more satisfying result.  Suspended sediment from active erosion was (and still is) captured rapidly, building up the backfill and providing substrate for riparian vegetation to establish.  Raising the grade provided more storage for groundwater to be release in the dry season.

In the past, when we’ve had a dry spring like 2013, the largest watershed on the main creek (U shaped channel) would be down to a trickle by mid-June.  As I write this, there is still enough water flowing at the ram pump intake (below 4 structures) to pump water for livestock use (~1gpm), with ~5+gpm left for instream use.  My downstream neighbor noted the other day that he usually sees the creek drying up by now, but there’s more water than ever in summer.

A few lessons were learned on this project.  First off, surveying the grade of the channels before making grand plans is important.  By eye, I originally thought most of the channels fell at 1-2%, when it turns out after surveying that they were closer to 5%.  The ideal approach would have been to install several gullies in succession, with the backwater of one meeting up with the base of the upstream plug.  The higher rate of fall than anticipated made this doable, but they covered less ground than anticipated, so currently the only channel with these multiple features implemented is the main creek, since it gives the most economic return (ie late season water flow).

Second, building for high flows is a must!  I thought I did a pretty good job of it, but when we received 8” of rain in 24 hours in November 2012, there were a few problems.  One of the plugs was pushed over somewhat by the high flows, changing the shape of the weir and the location of the outflow.  This caused the structure to be flanked by the flowing water.  Repairs were relatively simple when the water levels went down.

Another issue related to flows is some of the straw bales and wood used to fill the plugs were floated by the flows of that event…these items ran downstream, causing some minor damage, and scouring out some of the fill.  Again, minor repairs were needed, and this month I’m going to re-add some fill material, and tie it down better with branches, jute netting, and heavier wood (oak, not fir).

All told, this project was a big success…gullies are stabilized and more water is available for farm and instream uses.  The grade miscalculation increase the number of plugs that I’ll need to attempt to return the landscape to it’s pre-abuse condition, but it appears to be a very good start.  Thanks OWEB for the opportunity to improve our land and waterways.

Some pictures below, and more are at my google page 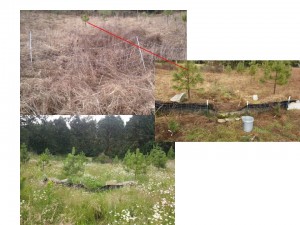 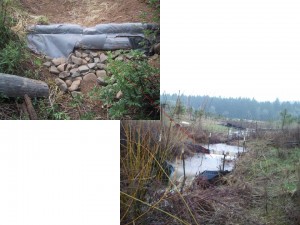 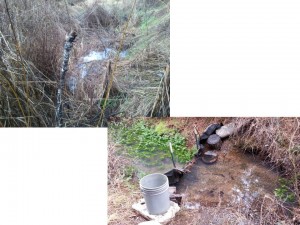