the disappeared and the appeared 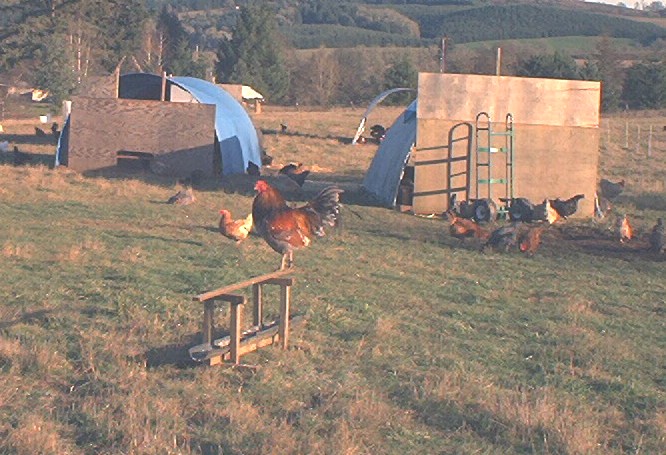 So today I’m nearly over my flu and was able do more than just haul myself out to do chores. I realized when I was out at the chicken pen that the dynamic of the roosters seemed to be different. And then I realized that I didn’t see my favorite rooster Prince anywhere.

He has been my favorite of the four because he is the only one with a nice personality (meaning: he doesn’t try to kill me!) and because he is gorgeous. He looks somewhat like a red jungle fowl, the bird which is the ancestor of today’s domestic chickens.

I looked all over for him, but the only sign I found were two long tail feathers. I keep hoping that maybe he just got scared off or something and is now living in the nearby forest. Maybe I’ll keep believing that for a while. (sniff)

On the plus side, I saw the resident elk herd this afternoon for the first time all year. They were next door, wandering around, grazing, and trying to figure out if I (or any of the cars that stopped on the road to check them out) were scary creatures.

My final sighting of the day was of the great horned owl that frequents these parts. I saw him flying along the edge of the forest behind our place, and then I heard him calling. I’d be more excited about the sighting (being a bird geek by nature) if I didn’t think that he might have been responsible for the disappearance of our rooster!